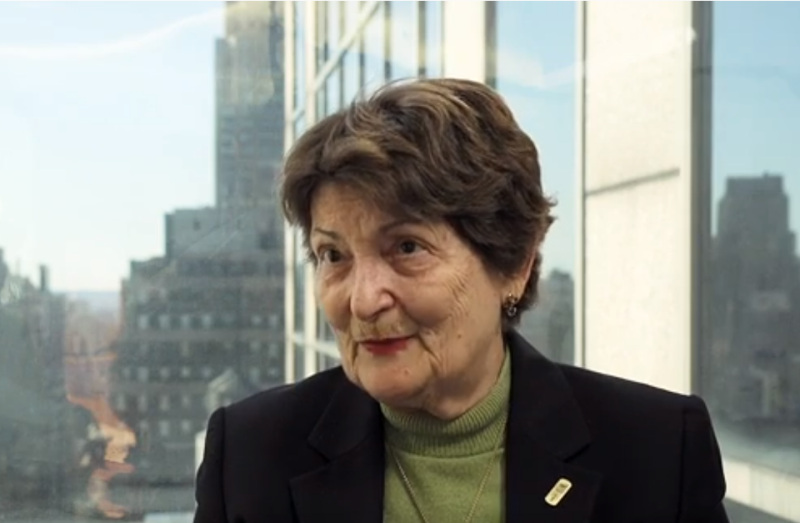 In her presentation at the Lewis Burke Frumkes Center for Writing and Culture at Hunter College on October 15, 2019, the endocrinologist, physician and public health policy advisor spoke of the evolutionary aspects of diet, pointing out similarities between the traditional Cretan diet and the diets with which human beings evolved. In contrast to contemporary Western and particularly American diets, with their dependence on ultra-processed food high in omega-6 fatty acids, the traditional Cretan diet, Dr. Simopoulos noted, resembled that of early humans in its balance of omega-6 and heart-healthy omega-3 fatty acids.

Dr. Simopoulos’s talk drew in part from her own decades-long investigation into Omega-3 fatty acids and the traditional diet of Crete prior to 1960, the findings of which she had brought to broader public awareness in her 2008 Aristeon Award-winning best-seller The Omega Diet and her book The Omega Plan.

These publications complement a much larger body of research publications, including over 360 scientific papers and the editing of dozens of books and journal supplements. The books also reflect her record of public health advocacy, including her tenure as Chair of the Nutrition Coordinating Committee at the National Institutes of Health and her service as consultant to the Office of Consumer Affairs at the White House. Prior to that, she was the Executive Secretary of the Division of Medical Sciences at the National Academy of Sciences. Dr. Simopoulos was the first recipient of the Presidential Award for Studies in the Field of Obesity and Weight Control.

In 1990 she founded the Center for Genetics, Nutrition and Health, a nonprofit educational organization in Washington, DC, of which she continues to serve as president. The Center is now co-organizing, together with Hellenic American University, the upcoming “International Conference on Food Classification Systems and the Omega-6/Omega-3 Ratio”. Dr. Simopoulos notes, “as a member of the Board of Trustees I am very pleased that such an important international conference is being held in the auditorium of Hellenic American University. I cannot imagine a better place for such an important international gathering.”

Last summer, Hellenic American University had the pleasure of hosting...